Effect of peppermint oil on shelf-life extension of dragon fruit 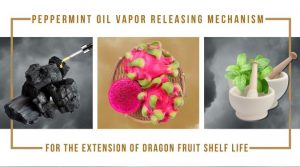 Essential oils could be used not only for aromatherapy, this fragrant plant extracts also have several valuable potentials to be explored. One of their benefits evolved for the food industry over the past several years is their role as an antimicrobial which make them play a vital role in extending the shelf life of many food products.

Having a present fresh odor, peppermint oil (Mentha piperita) is commonly applied in a variety of foods and beverages. Numerous studies found that peppermint oil vapor is able to inhibit the growth of many pathogenic bacteria and fungi. In order to create the affordable innovation that let Thai farmers and entrepreneurs to export their product worldwide, Associate Professor Dr. Narumon Matan and her research collaborators of Research Center of Excellence in Innovation of Essential oil aim to develop the essential oil releasing packaging that could be applied for antifungal and shelf-life extension of fruit during storage and transportation.

Lately, the peppermint oil absorbed activated carbon has been developed to control the releasing of peppermint oil vapor for antifungal activity. The observation of its efficacy on dragon fruit storage shown that it could 100% inhibited the growth of pathogenic fungal and delay shriveling of dragon fruit which are the major problems faced by dragon fruit exporters (Figure 1). Meanwhile, it also able to extend shelf-life of dragon fruit from 7 days to 21 days. Surprisingly, the hydrophobic essential oil molecules that covered the dragon fruit surface could prevents moisture loss of the dragon fruit. Thus, it maintained dragon fruit’s firmness and the greenness of its bract for more than 14 days without any negative effect on dragon fruit quality. 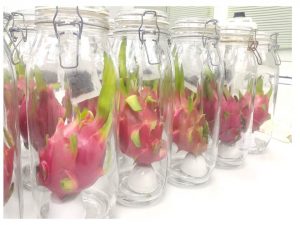 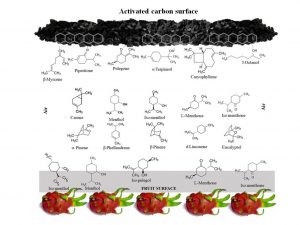 Not all the absorbed components were released from the activated carbon. This is due to the higher molecular weight and affinity to carbon surface. The released components would move into the air and diffuse toward the dragon fruit surface. Depending on the component’s properties such as low vapor pressure, high boiling point and high molecular size, some components would be accumulated and cover the fruit surface then performed an antifungal activity. Five components including iso-menthone, menthone, iso-menthol, menthol and iso-pulegol were found on the dragon fruit peel. Thus, these components were responsible for antifungal activity, especially, menthol and menthone.

The benefit of this innovation could help prolong the transportation and storage time of dragon fruit during export.  This finding could promote and support Thai dragon fruit as a premium product among world market's competitors. 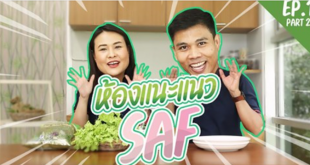 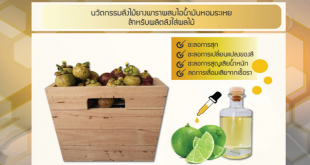 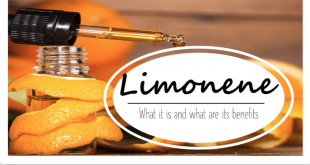 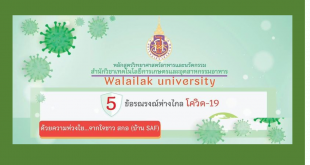